If you have a video series you're interested in hosting under your own brand on Cereal, you might be wondering how best to set up your series to get the most out of the platform. You are in the right place! We'll cover how to set up the series, how to upload videos to a series, as well as some tips and tricks on membership features as it relates to video content. Before we get started, if instead you're looking to import a series or playlist that has already been completed, check out this article instead.

Navigate to the Series tab on your admin view, and create a new Series. It's important that since this is a new series that you leave the "YouTube Playlist ID" blank. Otherwise, make sure to include a title, description, and a series cover image.

Two other options in creating a series that are worth mentioning are the "Default Post Access" field and "Feature Options" section.

Default Post Access lets you set the access to the series across all posts within the series. You will be able to override the access level on each individual post. This is useful if you want the Series itself to be accessible for paid tier members, but make the first episode available for free tier members, as an example.

Feature Options lets you decide if you'd like to feature (or highlight) this particular series on the front page of your Cereal site. All featured series will be shown right under the home page banner, in the order you indicate, and with an additional line of text from the "Featured Headline" displayed when the user hovers over it. 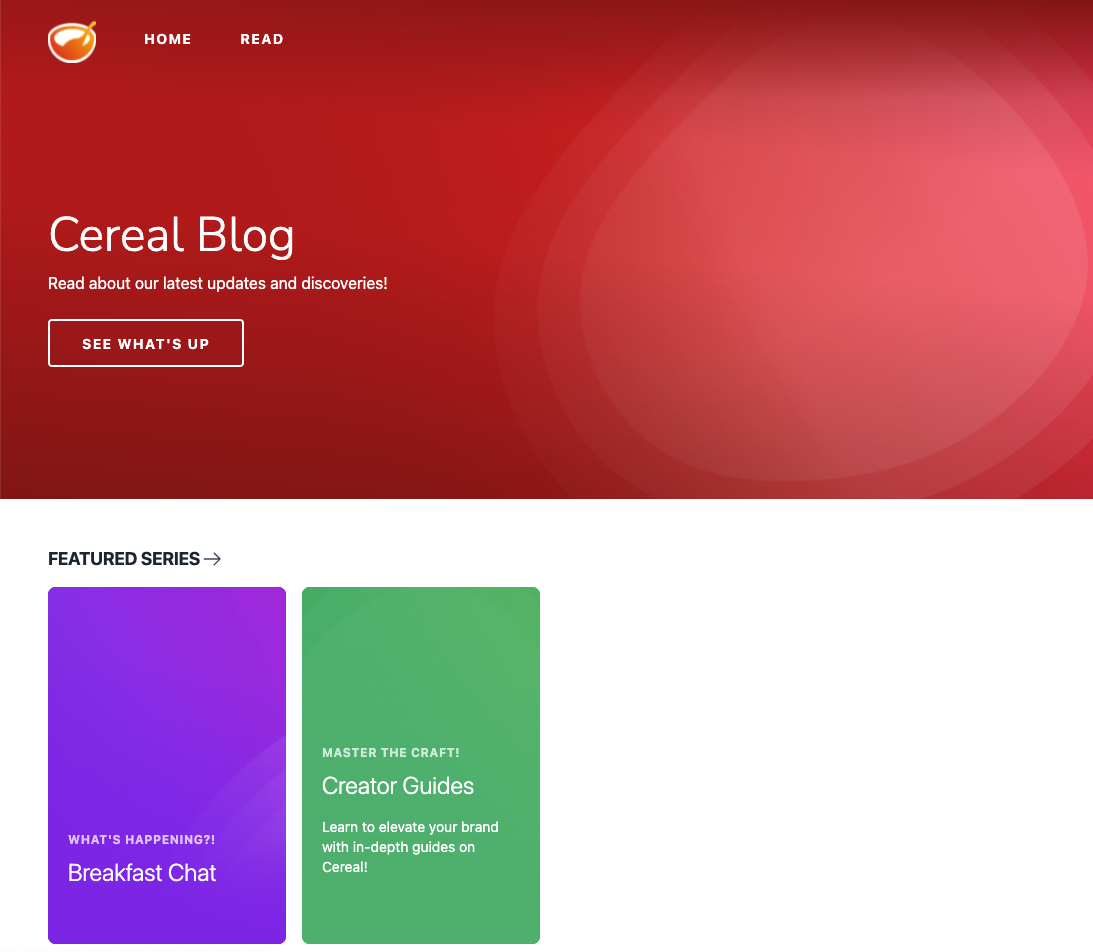 Now that you have your Series created, we need to create the first Video Post (or episode) for the Series. To do this, navigate to the Post tab, create a post, and select Video Post. Note that Blog Posts and Poll Posts can also be assigned to a series, and will show up in a separate tab. For now we'll focus on video. Once you're on the "Create a new Video Post" screen, you can add your video link from YouTube, Vimeo, or Twitch. Unlisted videos are supported as well. Once you have the link and paste it into the upload field, you'll get a prompt to automatically populate the post with information from the video. Select Yes to populate, and then edit or update fields as needed.

Once you're happy with the content on the page, make sure to update the "Series" field to tag it against the series you created in the previous step. This is also the time to assign it the "Post Access" that you would like for the episode, note that the access level you set when you created the series is the default selection. Lastly click "Save and Publish" and your video and series will be pushed out to subscribers as well as displayed on your Cereal site.

Voila! You have your series and first episode created and online!

In this article we reviewed the steps to create a series and launch the first episode, but you may have noticed a lot of tools and fields available that we didn't cover. In this section we will briefly review a few strategies to customize and get the most out of Cereal.

A great way many creators on Cereal get engagement and incentivize fans to subscribe to paid tiers is by creating a premium series, and making a few adjustments. Creators have seen results in making the first episode free, or by changing the access level on the episode from paid to free after a certain amount of time, or even making it free but require a sign up before watching. The sky is the limit, so of course feel free to experiment with what works best for your content, audience, and offering.

While many of the creators on Cereal focus on video content, often the most valuable content they produce is either text or poll based. Since creators are able to tag blog posts and poll posts to a series, and post access applies to those posts as well, it's a great opportunity to publish supporting material to a series. As an example, a creator hosting a series on best restaurants during travel can publish a restaurant guide as a post, or even create a poll to ask their fans where to visit next.